Rodman, Heading to Hall of Fame, Is Already Back on A List 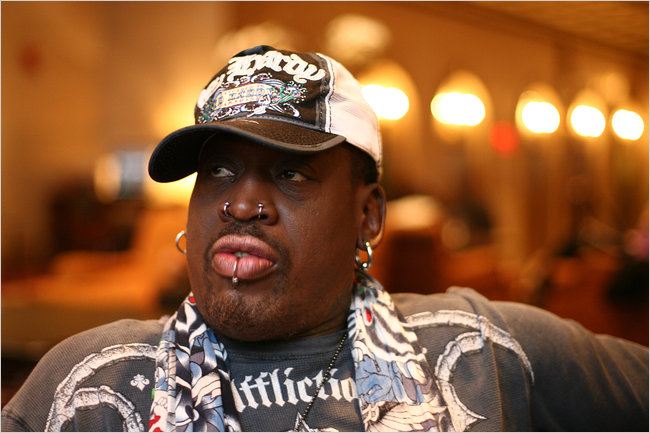 Dennis Rodman sat in a Midtown hotel lobby Wednesday, a few hours before kicking off a month long, multicity celebration of his 50th birthday at a Manhattan strip club. He pointed to each of his five rings. “This is what I’m all about these days,” Rodman said. “My basketball days are a thing of the past. I’m a trendsetter now, a celebrity.” Rodman was not pointing to the five N.B.A. championship rings he earned as a menacing rebounder with the Detroit Pistons and the Chicago Bulls, but his five facial rings: one on each earlobe, one in each nostril and one on his lower lip.“I’m glad that people now look at me as Dennis Rodman the entertainer, Dennis Rodman the celebrity, Dennis Rodman the wild guy; I created that image,” he said. “If I had a best buddy, it would probably be Dennis Rodman.” He was asked about the image of Dennis Rodman the basketball player, a 6-foot-7, 228-pound pogo stick with the wing span of a pterodactyl who earned his ticket to the Hall of Fame by soaring for nearly 12,000 regular-season rebounds.