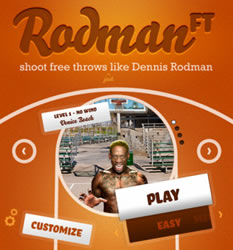 Rodman FT is a revolutionary basketball game released today for the iPhone, iPad and iPod Touch, developed using the latest available hardware and software. It was built using the advanced Unity 3D Game Engine and footage of Dennis Rodman shooting free throws. In addition to the regular levels there is also an Augmented Reality challenge level, allowing players to play against each other by distracting the shooting opponents. To enable both players to view the action live on a TV screen the device can be connected to it via a cable or wirelessly using an AppleTV. Gameplay is as simple as it should be for a casual game  you control Dennis using one finger. One gesture is enough to give the ball direction and strength. The scoring system and realism make this game addictive. The game locations were shot in and around Los Angeles, California and the footage of Dennis was shot in Miami, Florida. The game is true to his nature and by using in-app purchases players can buy additional hair colors and outfits for Dennis to wear. From the standard white jersey to a translucent pink top and shiny golden dress, and from yellow, red or green hair to a hat with feathers. One can play in true Dennis Rodman style. The game is free and without ads. Tantrum Solutions Ltd is a London based indie iOS and Mac OSX game development company. Since the release of their first game in 2010, several of their games have been featured by Apple on iTunes and have won praise and awards for their quality. The company has recently diversified its offerings and is now also making casual games aimed at all age groups