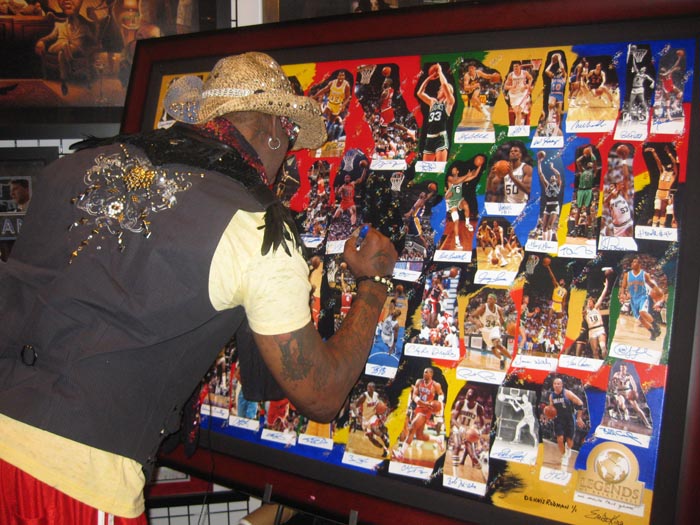 Dennis Rodman who was recently inducted into the Basketball Hall of Fame is now being honored as one of the NBA legends of Basketball of all time. Mr. Rodman personal Players 1/1 is now available to the first collector to pay $25,000 to own this one of a kind artwork. This piece is the official NBA licensed artwork that follows the NBA Fifty Greatest lithograph that was produced by the same producer of this project. The NBA Fifty Greatest lithograph initially was offered at $25,000 and now sells for $75,000 and the producers feel that the same values will follow for this piece. The NBA Legends of Basketball  We Made This Game by artist Erika King artwork captures the excitement and electricity of the NBA, while showcasing the sports finest players in moving, colorful, vibrant images commonly equated with their on court theatrics and athleticism. The piece features Dennis Rodman, Michael Jordan, Magic Johnson, Larry Bird, Julius Erving, Oscar Robertson, Jerry West and Shaquille ONeal, plus current stars Kobe Bryant, Dwyane Wade, LeBron James, Steve Nash, Yao Ming, Dwight Howard, Carmelo Anthony, Dirk Nowitzki, and Jason Kidd to name a few. This original 40 by 60 hand-painted artwork on canvas will also include NBA-brand logos hand signed by NBA Commissioner David Stern and the official logo and trademark of the National Basketball Retired Players. For more information contact Cash McMahon, (305) 606-5157 or cashappeal@aol.com